Day 1 – Well we got started about 2 in the afternoon after Warren went to the doctor. It started as gorgeous day but as we got into Ohio, it was raining heavily on and off. We finally settled down for the night in a lovely rest area outside of Louisville KY and slept from 1 until about 8 in the morning central time.

Day 2 – We got to Mammoth Cave National Park in time to sign up for one of the tours. The tour lady advised us to wait to sign up for any others!! Well, Mammoth Cave is well, MAMMOTH and a cave. We went down and down for a two mile walk through the historic section of the cave – it was dark, cool and well, a cave, a BIG cave. We squeezed through narrow areas where you had to turn sideways and had to crouch to get by. It started the basic theme o f the trip – canyons. It is a big canyon underground. Where we were, there were no stalagtites, mites or whatevers. I guess other tours do offer a bit more of that but we decided to pass on that for now. Take note that we decided to forgo the tour that promised you could spend 6 hours crawling on your belly or knees through areas as small as 9 inches high. They recommended bringing your own kneepads. Maybe next time…. It was very different from the caves at Skyline Caverns where they do lights etc. I could barely take pictures. But everything is very cheap. Lunch at the lodge was less than $15. We decided to camp instead of stay at one of the local motels in Cave City. It pays to be seniors!! Of course as soon as we got the tent up, marathon thunderstorms hit and we hovered in the van trying to get the cell phones to pick up a signal. No luck.. The doctor had called earlier to say that Warren was healthy and nothing indicated in all the blood tests they took. So we called him cured. He is much perkier now. We went into Cave City for Mexican food and it was a nice little restaurant and not bad food either!!

Day 3 – Had a good night sleep in the tent this time. Got pretty cool by morning but we were comfy. Cooked nice breakfast and then took a 2.5 mile hike down to the Green River and back. This was your basic one mile down and one mile up kind of hike. All sorts of wildflowers which I still have to look up. Amazed at the number of butterflies we have seen. Saw one of my favorites today as well—Woody. Will have to get more tokens to take showers though as the hike was grueling coming back. Good exercise though. Very glad I have the new shoes!!

Day 4 – Well we went to bed and it was blue skies and I was afraid it would get really cold. Well, surprise, surprise. It rained, poured and rained some more. We had to break camp this morning in a break in the deluge. Another hour was spent figuring how to work with the GPS and the software. I ended up driving and a new rule was formed. Warren can only complain about other drivers when he is driving!! Rule 1 by the way is that we try to avoid fast food. Not easy to do on the interstates, however. The corollary is that we won't have hamburgers if we do stop! We saw big fat turkeys and much of the back country Kentucky countryside through the intermittent downpours. I am sitting in the car now typing as we head to Kansas City. Our last big city was St.Louis where we actually went right by the huge arch – very nice!!! It has finally turned cold though and my shorts just aren’t cutting it!! On to a Comfort Inn, wireless and nice beds!!
Posted by Beth Brandkamp at 10:03 PM 2 comments:

Almost on the road 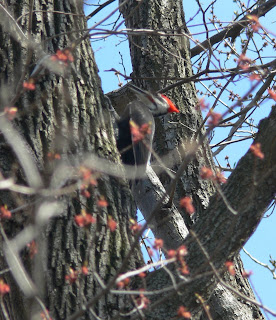 Well, the van is packed and we are ready to roll. Now Warren just has to get through his doctor's appointment and blood tests and hopefully, we head out tomorrow afternoon. A beautiful pilated woodpecker (Woody) made his presence known this afternoon in our backyard. Unfortunately the picture is obscured by some branches that are out of focus in front of him.
Posted by Beth Brandkamp at 7:50 PM 2 comments: