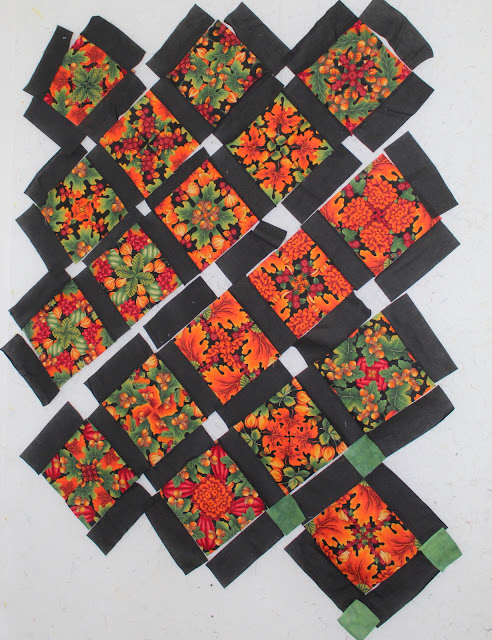 For some reason, I decided to cut up this autumn fabric into three different sizes of squares so determining sets was a little tricky as I like to use all of them and also like at least a lap quilt out of them.  These were the largest with a finished size of 6 1/2 inches.  The biggest challenge was the next size was 6 inches so had to be careful which ones I was using and even then had at least one mistake! 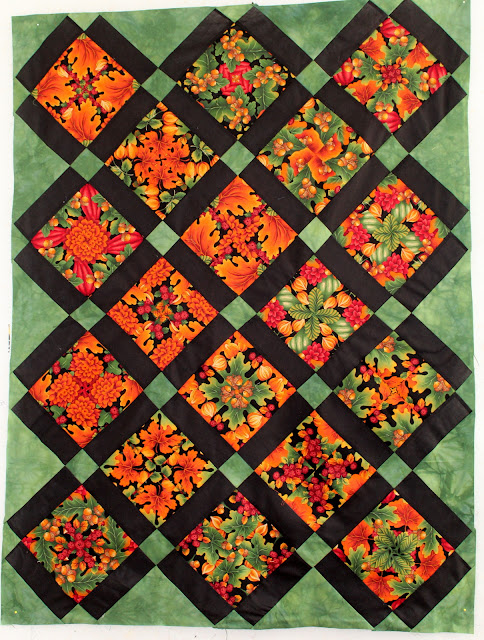 Looking pretty good for this fabric which I am completely sick of! 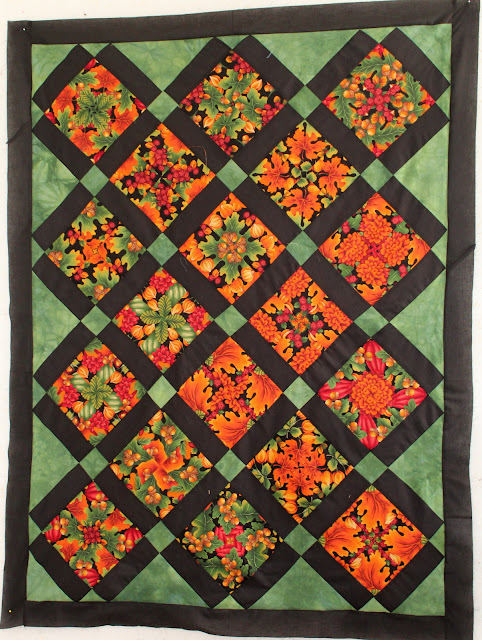 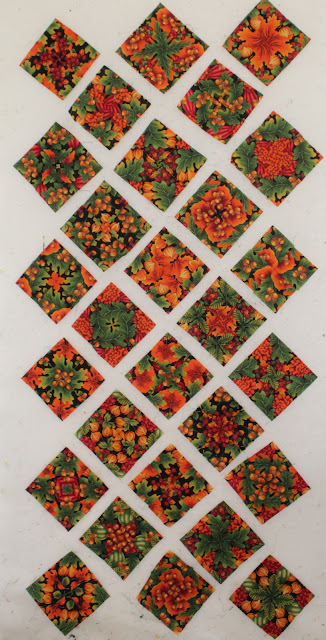 This is the second set which are 6 inches finished.  I thought I would use this arrangement but it would have necessitated too many borders (which is my least favorite part of  making tops). 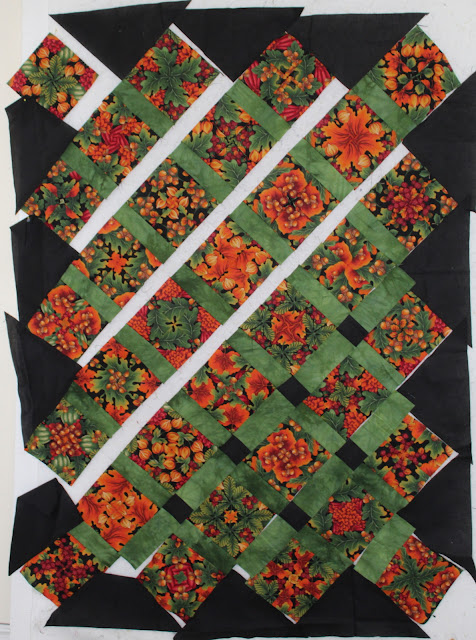 I finally decided on this set but didn't have enough of the green (which is one of my hand dyes) to use for the main part of the sashing. 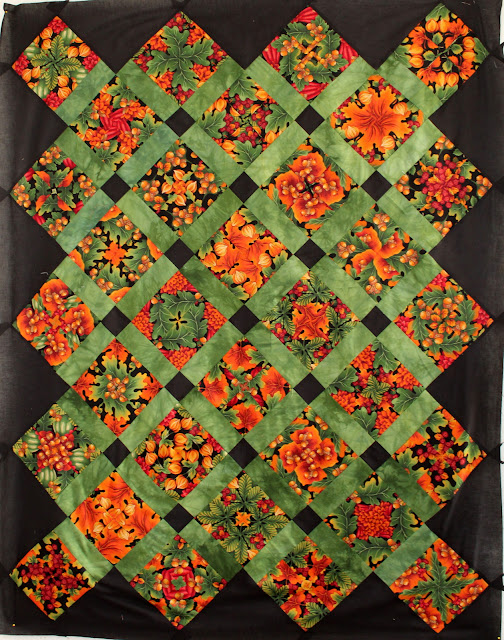 Didn't have enough of the green to surround those outside "posies" and actually had to do one partial seam to finish this one up.  Luckily I have lots of this black which I would like to use as I just don't use black anymore.  I have used so much white in these quilts that usage is measured in bolts not yards!!  Luckily I had quite a bit of white that was not suitable for dyeing!  We won't talk about how much I still have for dyeing!! 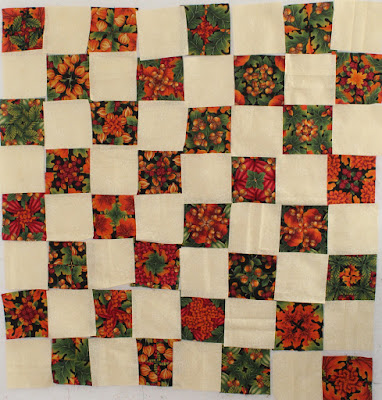 Here is the remainder which is enough for a baby quilt.  I have used a neutral beige for the alternating squares.  It will require a 2 inch border to make it 40 inches square so will use some green to pull it together.  Orange is just too much!!  I will be very glad to get these squares used up!  These squares finished to 4 1/2 inches!

Posted by Elizabeth at 11:59 AM No comments: 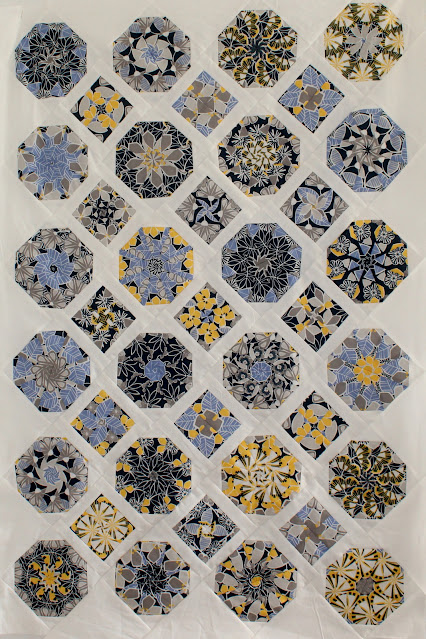 This may look familiar for long time readers.  I bought all the rest of the bolt of fabric at Joann's last year as it was only $1.80/yd and I knew it would make good stack and whacks.  This is probably the fourth quilt I have made with this fabric and there is one more below!! 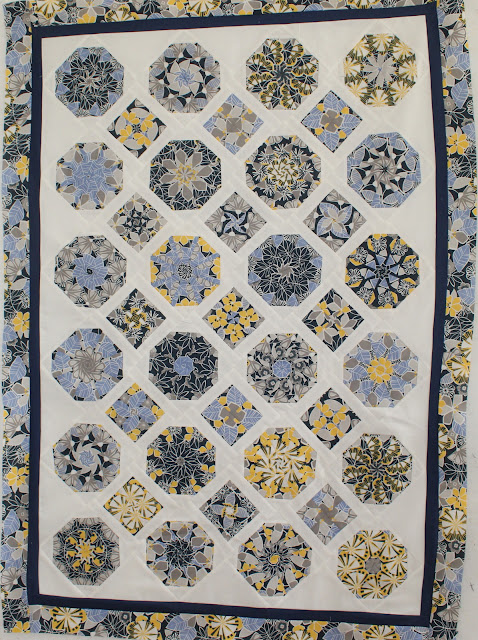 I actually had enough fabric left over that I was able to add a border with it.

I still have a bunch of blocks made with an even prettier color palette of this same fabric.  I am getting really bored with it however.  I try to do different sets to alleviate said boredom but there are only so many ways to use these blocks that don't require a ton of work.  As they are all charity quilts, I am only willing to put in so much effort! 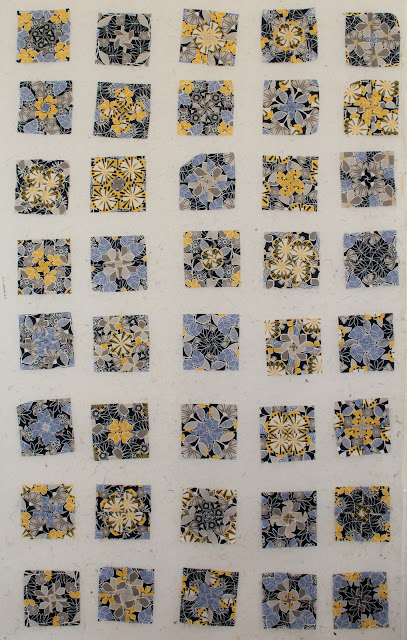 These are the "posies" from the same fabric and then the challenge of a different set. 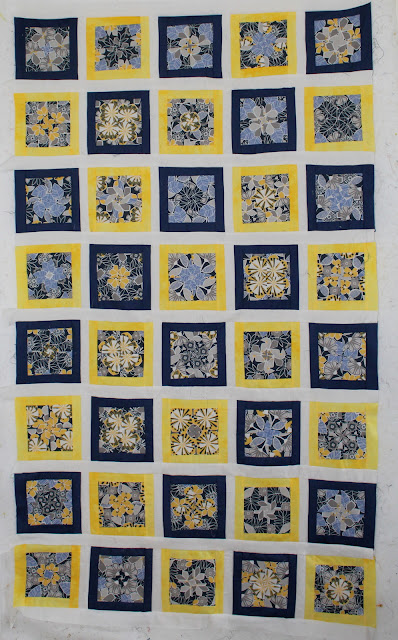 I wanted to get rid of the remainder of this navy blue sateen which is annoying to work with.  I wanted to liven it up a bit so decided to alternate the yellow and the blue as borders on the blocks.  I put one inch sashing between the blocks and 1 1/2 inch between the rows.  I wanted to make a cot sized quilt which now measures about 40 x 70.  It's hardly noticeable that I used the two different sizes but did allow the quilt to be about four inches longer!

Now it's on to the next batch!  I still have bags of completed blocks.  I really want to get back to something a bit more artsy!

It was fun to participate in a Zoom meeting of our QBTS guild yesterday.

Posted by Elizabeth at 11:14 AM No comments: 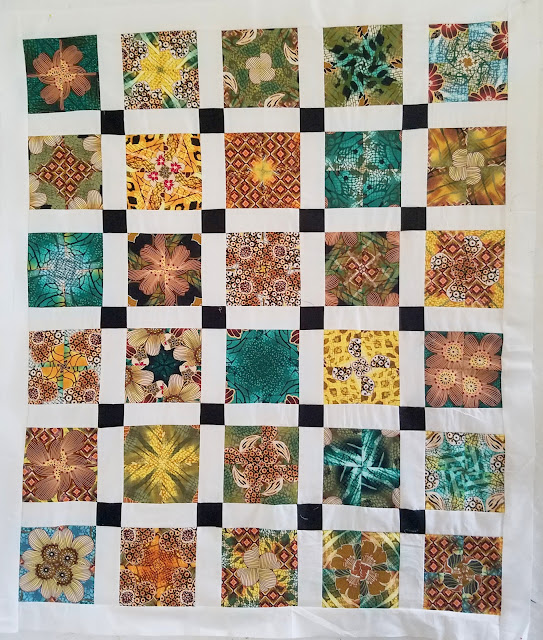 This is one of two quilts I made from what I considered some pretty ugly fabric.  I almost prefer this type of fabric for stack and whacks as it can't get worse and usually is better.  I am not sure this was true for this one!  It is okay but not my favorite for sure!  As usual, I did two different sets! 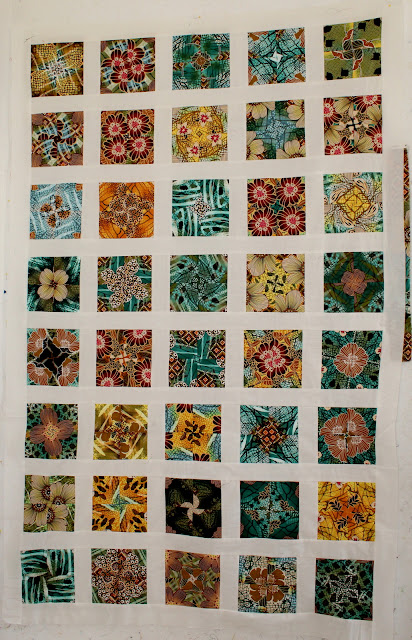 This is the second one. 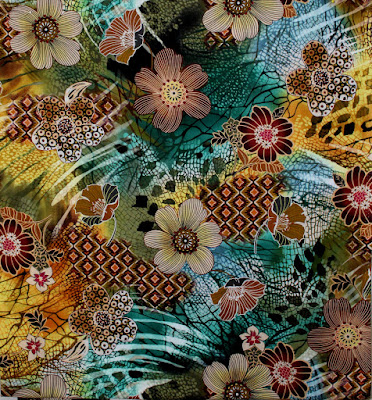 This is the ugly fabric.  It had a 24 inch repeat though!  Still have a bit left which I will incorporate into the backs.  I obviously bought it to do hexagons but didn't think it was worth the extra work of hexagons these last few days. 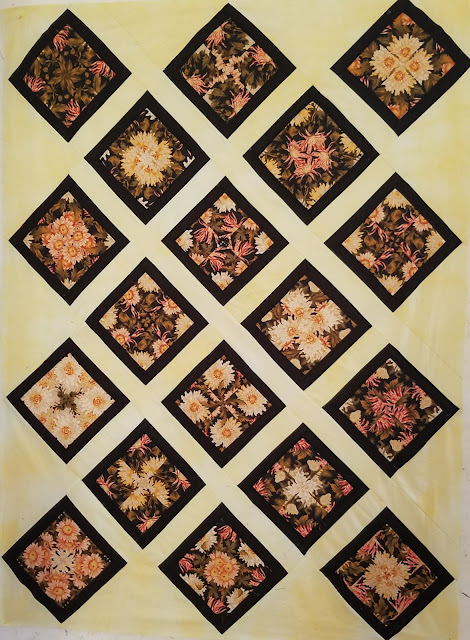 I have bags and bags of finished squares that I made during my time with leg in cast and before I left for Rochester in the spring.  This was one of those bags which didn't have that many squares.  These were probably leftovers from a previous project but I found an arrangement that used all of them and some hand dyed pale yellow fabric for the set.
I gave 15 tops to a friend who has a long arm and is the leader of the charity quilt group.  I managed to find backings for all of them as well so she will be kept busy quilting for awhile!  I feel guilty giving her three more this soon after giving her all the others! 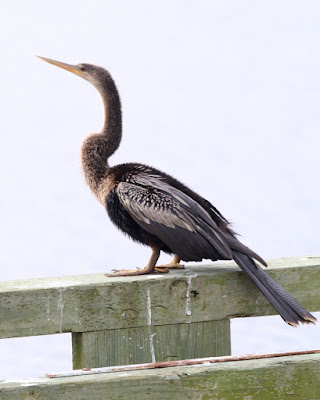 My daughter and I took our annual pilgrimage to Huntington Beach State Park last week shortly after I got down here.  It was high tide so we mostly saw egrets and more egrets with an occasional siting of others.  Before we left we spotted our Wood Storks in their arboreal retreat and Lisa ran back and got some good pictures of them and the one Roseate Spoonbill that had joined them.  This is the one Anhinga we saw which surprised me as it is a salt water marsh and I usually see them in fresh water areas.  He posed for us though! 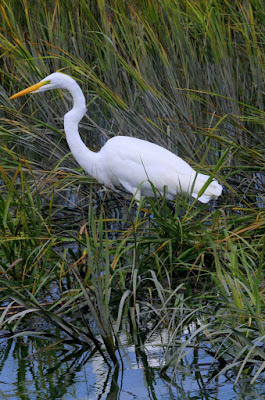 This was one pudgy great egret!!  He was chasing everyone away and my daughter got a great picture of him in flight!  I thought he was a swan when I first spotted him (or her). 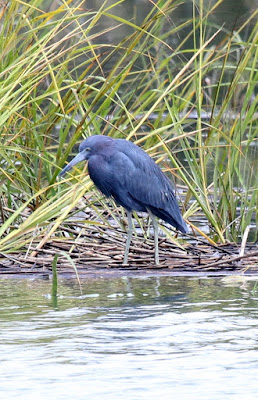 This was a Little Blue Heron that I spotted off in the distance and was amazed that I got a decent picture of him. This is a very handsome Osprey!
Posted by Elizabeth at 10:34 AM No comments: