Back from Quilting by the Lake

Well, another successful week at Quilting by the Lake (QBL). The class was all that was promised and more and I feel like I have made a breakthrough in my work. The class was called Black Fabric Sketches and was taught by Cynthia Corbin, a quilt artist from the Seattle area. Two of her close art quilt collaborators are Jeannette DeNicolis Meyer and Ann Johnston, two of my favorite teachers. Cynthia likes to dye also and the 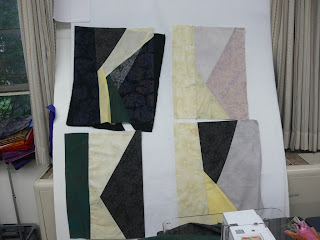 t-shirt she wore the first day of class she had dyed!

The first day we were introduced to a technique created by Cynthia in response to some classes she had with Nancy Crow early in her career. The technique basically is to take a whole piece of cloth and to basically draw a sketch with your rotary cutter. Obviously, you don't do too detailed a sketch. The lines then separate the whole piece of cloth into sections which you then use as pattern templates to cut out fabric and put the jig saw puzzle back together. Using these pattern templates, you can make a series of pieces trying different combinations of colors, or values in each piece seeing which you like best. It is fast and fun. If you don't like the resultant piece, you then do the Cynthia "cut, cut, mix, mix, put, put" technique (cutting them up, mixing them up and then making a new design more to your liking). 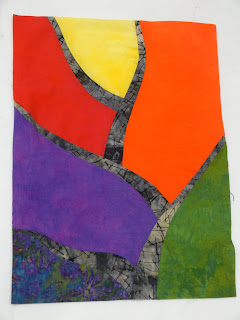 We only did straight lines on the first day and made many different versions of the same or similar simple or complex designs. The second day, our cuts were curves and on the third day we pieced in skinny pieces where the lines were. 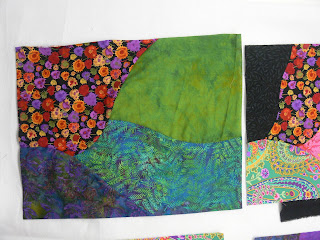 The last two days of class were to make a final project that would be done in two days and would be good enough for a quilt show!! Quite a lot of pressure but it was good. I took one of my Yellowstone pictures, did a quick sketch and was ready to be off and running on Thursday. 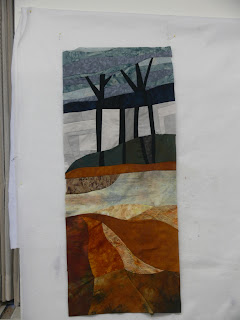 Thursday, I cut two black sketches to cover 1/2 of the whole picture. I managed to somehow get the first half almost done on that day despite taking an extra long lunch to visit with my friend Sue from Albany. Thursday night was our free night and I did some piecing in my room but was too tired to do much. 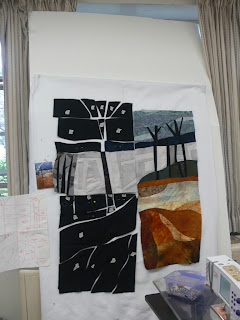 The weather went from okay to pretty hot and very humid by Thursday. It was very, very nice to have nice air conditioned dorm rooms to go home to. An added burden was the fact that the regular dining facility was closed so we ate in the un-air conditioned snack bar in the Student Activities building. While the food was almost as good as usual, the atmosphere definitely wasn't! We have gotten spoiled in previous years. Again, that air conditioned dorm room was wonderful!!
Posted by Beth Brandkamp at 6:58 PM No comments:

Well, there will be no computer at Quilting by the Lake (QBL) for me to do daily logs but hopefully I will have enough pictures to have a nice page when I return. I have accumulated two file sized boxes of fabric, one all hand dyeds (all I have left after selling quite a bit) and the other, some solid substitutes and big Kaffe Fassett type prints. I am in love with his color palettes. I didn't attempt to put together any kind of palette for the class.

The class is called Black Fabric Sketches and is taught by Cynthia Corbin. A friend took her class last year and really enjoyed it, so hopefully I will as well. Concurrently, I have bought Jane Dunnewold's new book on finding your own visual images and there is some overlap with the class so I am taking it along. I will have too much as usual as I tend to fill the car no matter what the class is -- just in case...

I thought the image here was a cute little quiz so click on it to find out what kind of flower you are! In the description of my personality type, I thought it fit pretty well!

Posted by Beth Brandkamp at 2:00 PM No comments: 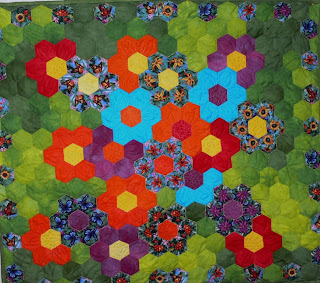 Another day of working on the Hoffman Challenge. I took the plunge and started to machine quilt the heck out of it. I started with each of the "petals" and quilted some depth into them and then did a circle stitch in the middle of each of the flowers. Now still have to do the centers of the Hoffman fabric flowers and then on to the background. 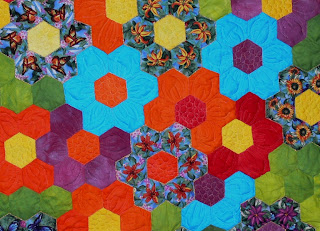 (by clicking on the picture, you can see the detailed stitching)
The bigger challenge is to walk away from the sewing machine so I won't be crippled for the next six months from too much tense work!!

Well, after finishing the quilting on the foreground, I started the background!! And then I undid the background which I didn't like the looks of. So, it is as done as it is going to be. With the new reading glasses, it was easier to undo all the stitching I had done but still tricky. Luckily, I had only done the bottom left corner which is probably where the eye goes to last so hopefully, it won't be too noticeable. I finally am relatively pleased with a rather boring traditional piece.
Posted by Beth Brandkamp at 4:40 PM No comments:

Well, it's about time I finished editting my old blogs (I've added pictures to almost all of them) and start doing something more useful!! I did select 350 out of the 2500 I took and have them printed at Kodak -- I was pretty pleased with the results. I have taken about 75 of those for use at the class I am taking with Cynthia Corbin a week from tomorrow. The colors at Yellowstone were definitely the best!! 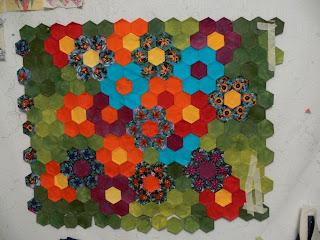 I have been feverishly working on finishing my Hoffman Challenge piece for 2007 as it needs to be in California about the same time I am at the class. I am down to doing the machine quilting and have decided to do a traditional binding rather than go with something a little trickier. The challenge was to find some dyed fabric for the binding as I had run out of the pieces I had used in the center -- I would have like the darkest value of green for that. 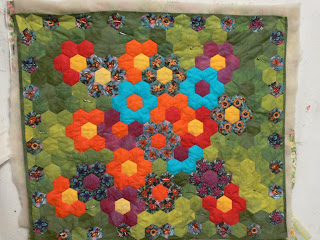 The weather is going to be good next week so hopefully I can get in some of my salt dye painting. It really requires to warmer weather to get it to batch as it is not something I can heat up in the microwave although.....
Posted by Beth Brandkamp at 2:53 PM No comments: 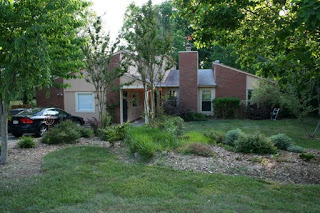 We spent the last ten days of our trip at Lisa's new house in Charlotte, NC. It is a beautiful little ranch and she kept us busy (especially Warren) helping with getting her settled. She had no furniture for pretty much the first week so we just used our camping stuff and slept on our air mattresses!

Warren was busy mowing lawns, putting up drywall and mounting new ceiling fans and well as other miscellaneous tasks Lisa had waiting for us. I finished the painting (mostly) of her family room, did some weeding and did the cooking and laundry for all of us. Most of my leisure time was spent trying to get my Hoffman Challenge piece done so that it would be in time to enter at the end of the month. I managed to get it as done as I had planned literally in the car on the way back to Rochester!! 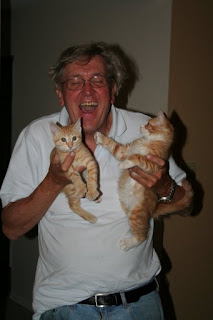 The best part (in addition to the fun of seeing Lisa) was playing with her new kittens (Jahi and Paka) who are two adorable two month old orange tabbies. They were constant entertainment. They are devoted to each other and play, eat and sleep together (and even occasionally go to the bathroom together).

I also got to at least see my old roommate Janice for lunch one day. She was heading out to Germany right from the restaurant. I had just called her but she made room in her busy schedule of getting ready to go so that we could spend a couple of hours together. She lives just a few miles from Lisa and I will see her again in the fall.

I also got to visit Mary Jo's which is a "famous" quilt store over in Gastonia.
Posted by Beth Brandkamp at 2:46 PM No comments:

The end of the trip -- Badlands and beyond 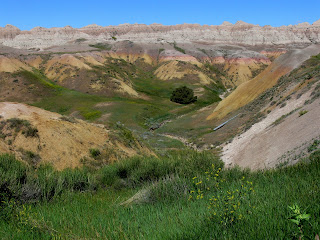 We got to the Badlands and the campground minutes before some ferocious thunderstorm. It was fun to watch the lightening all around when you are in this very desolate looking place. We chose to spend this night in the van rather than set up anything as we figured we would get an early start on driving the next morning, seeing the park first thing and then heading back east.

The Badlands are not a large geographical area but are interesting as there is yet another version of spires and canyons than that which we have seen in other places. There is a lot of color and from the readings along the way, this is a sight of a lot of paleontological findings. 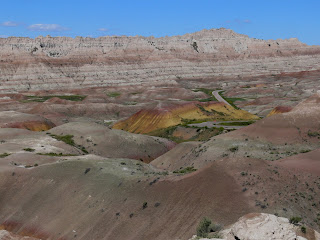 The Badlands were extremely colorful as well with the spires showing all different colors. It was strangely beautiful. My favorite part was the large "town" of prairie dogs though in one part of the park.

From the Badlands, we headed through the rest of South Dakota and into Iowa, then south through Missouri, Kentuck, Tennessee and onward to North Carolina. We headed through the Smokies there but we had already been to the National Park on another trip. We spent our second night on the trek back east in Tennessee and a real 70's motel where there were nothing but white panel trucks like ours -- very weird!!
Posted by Beth Brandkamp at 2:37 PM No comments: