Finishing a Top or Two for a Change 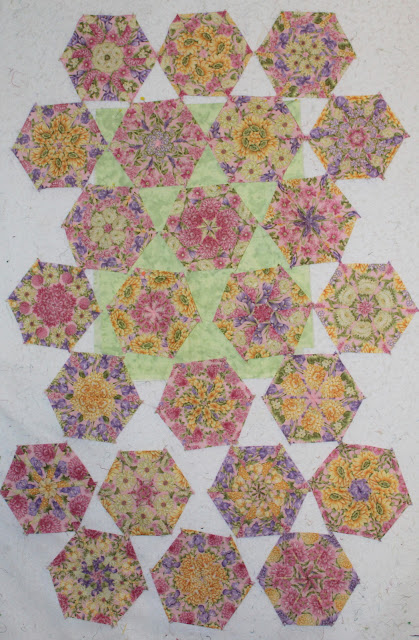 Auditioning the green to surround the hexagons. 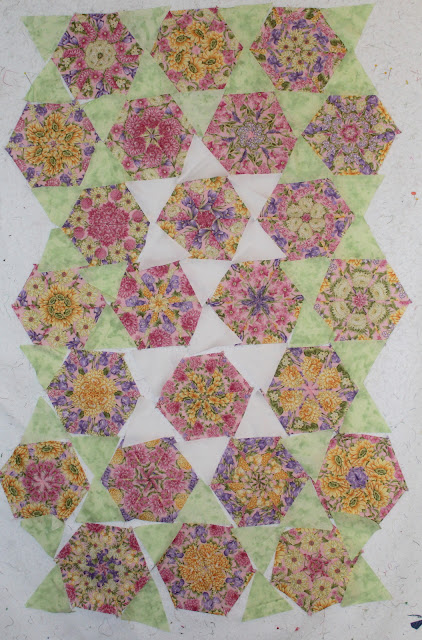 After looking at some of my previous quilts using this set, decided to surround the center hexagons with white instead of the green. 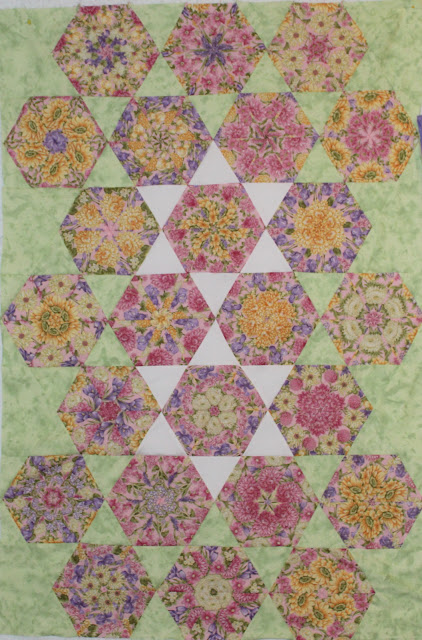 Finished the center of the top.  Had forgotten how I filled in the sides but remembered a template I had and realized it was for the half hexagons at the sides!  So that is what fills in the rows of three hexagons. 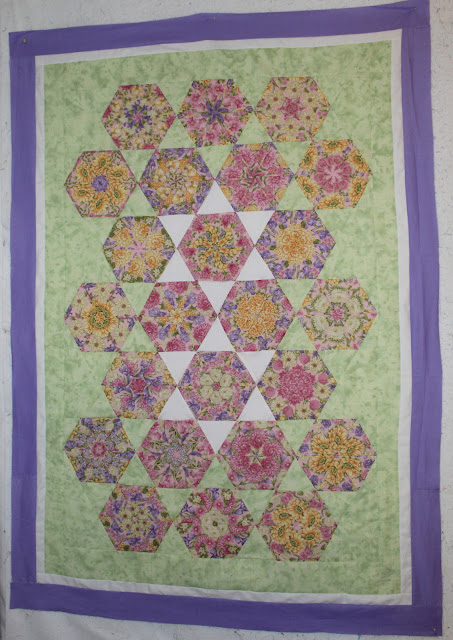 Top is all finished now with more green, a 1 inch white border and a 3 inch lavender border.  The quilt ends up about 44 x 65 which is a decent size.  I have enough to make a second quilt from the blocks although will have to use different background and borders. 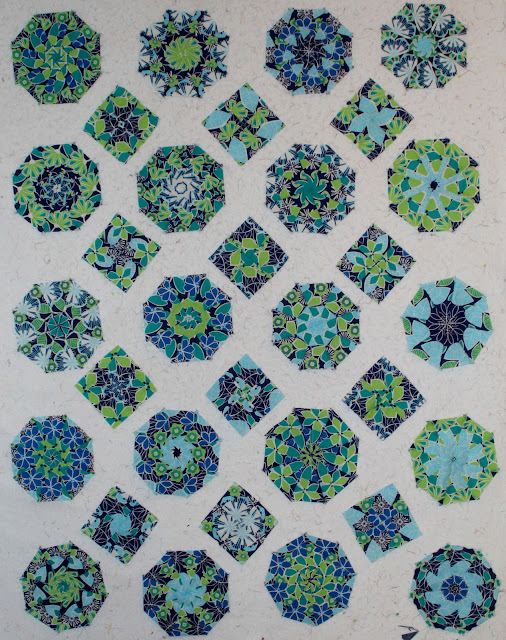 This is the next one in process.  I will use a 1 inch border around the 4 patches and white corners on the kaleidoscopes and the set will be on the diagonal.  I have enough to make at least two quilts, maybe three!

Posted by Elizabeth at 7:37 PM No comments:

Oh No, Not More Stack and Whacks! 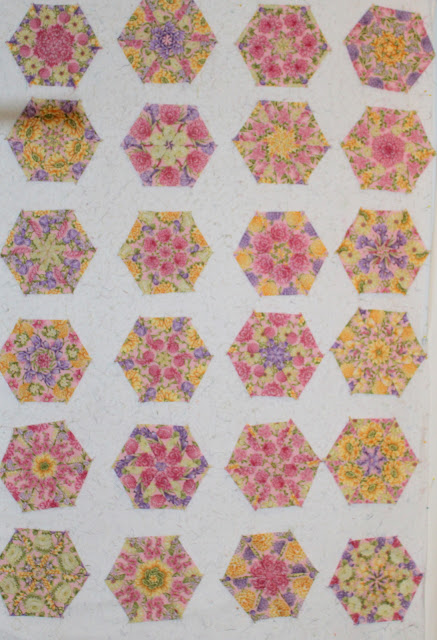 This is the first half of the blocks made from the flower fabric which I did find and is pictured below. 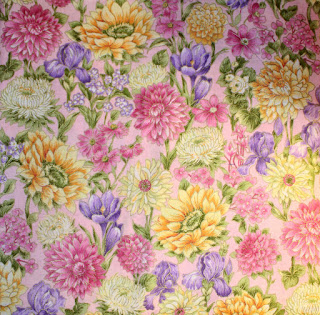 The repeat is about 12 inches.  It surprised me how well the blocks turned out as I really thought there wasn't enough variation and difference in value.  It is more subtle and I really like it! 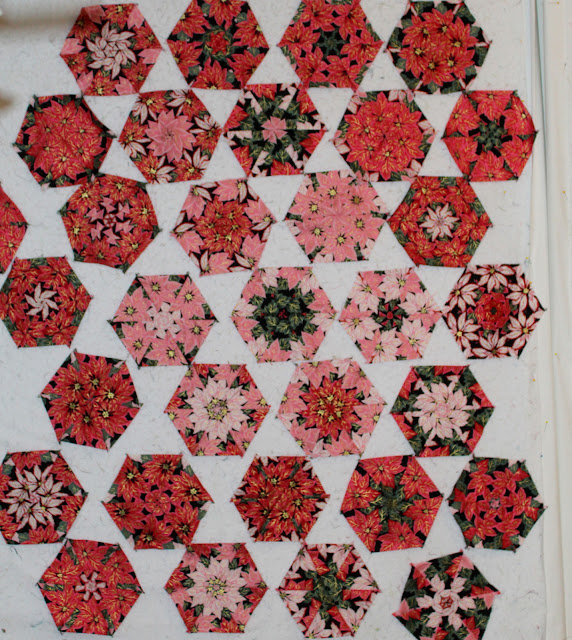 This is the very boring Christmas fabric I had.  I think I have a bunch more but am not sure I will do more hexies as I do think they are more repetitive than I like.  They are not as bad as I thought they would be though. 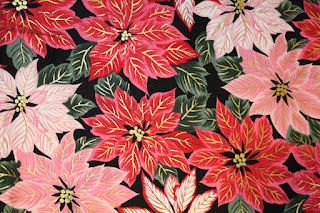 This is the fabric used in the above hexies. 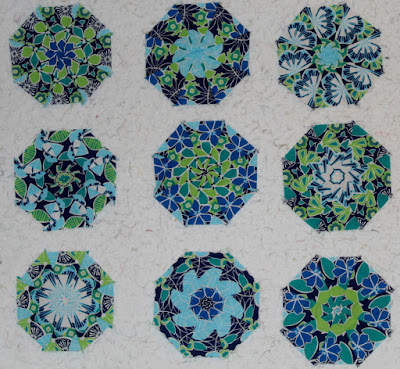 This is the same fabric but in a different colorway than the blocks in the last post.  I do like these better and have enough to make one heck of a lot of blocks!!  I may not give this one to charity although I may have enough to make a couple of big ones as well as some smaller ones.  this was the really cheap fabric I got at Joanns so bought what was left on the bolt as I thought it would make good stack and whacks.

I started doing these kaleidoscopic blocks many years ago at the suggestion of an email pen pal who discovered them.  I got completely hooked and swore them off for years.  I had one heck of a lot of fabric that I bought to do these and have been trying to use up this fabric.  My favorite fabric for these blocks is fabric that is not pretty but has lots of contrast and a fairly large repeat.  I found some gorgeous fabric that I probably intended for these blocks but have decided to keep it whole and use it for backs as you  usually have to buy quite a bit of fabric for stack and whacks.  My only exception recently was the Birds of Paradise fabric that I made into blocks.

I am getting around these days with a big black heavy boot and a cane.  I am back in my sewing room for a couple of hours a day.  My daughter hoped I was cleaning -- but not!  At least I am sleeping in my own bed again which is a great relief!  I have put my walker and my scooter in the basement for now.

Posted by Elizabeth at 7:46 PM No comments:

Back to My Sewing Room and Stack and Whack!

I have already made three or four quilts from this fabric and still had a bunch more so back at it again.  Think only two more will be done with this colorway but have 6 yds of another colorway which I like even better and have already cut up some pieces for some made with that!  For your future viewing.  We have no printer right now and are having a really hard time finding one in stock so any fancier art quilts are out for now as I make extensive use of the printer.  Same problem with finding a dishwasher which is on order but poor husband is doing dishes in the interim as they don't know when it will be in. 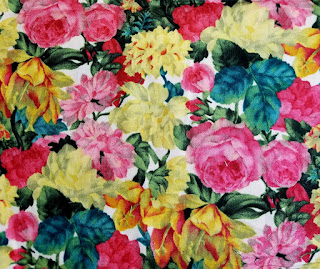 This is the fabric for the following blocks.  I have a whole bunch more of this fabric but the repeat is only 8 inches.  Haven't decided whether I will do kaleidoscope blocks or not to go along with these four patches. 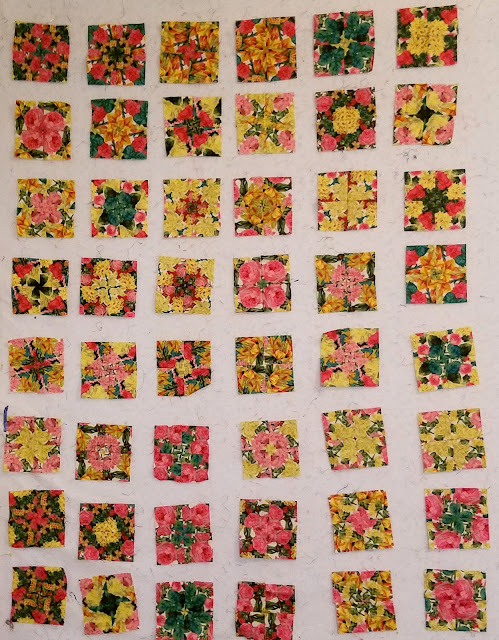 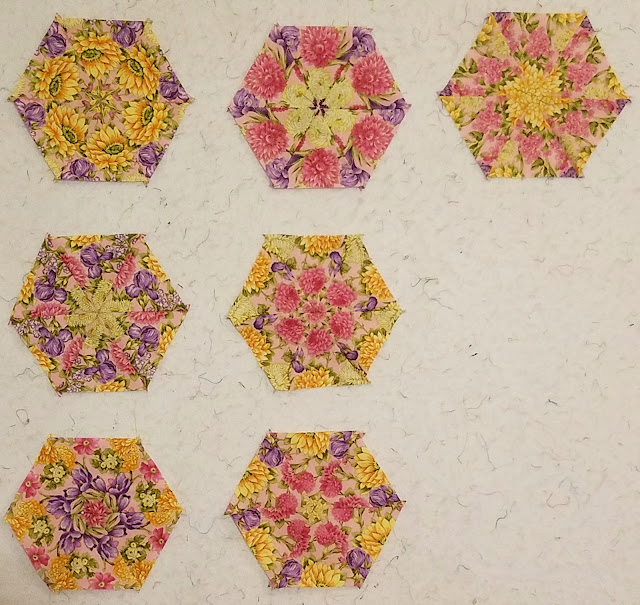 This was another fabric that had a fairly small repeat and i wasn't sure it would even work but seems to.  I don't have a picture of the original fabric as it was a relatively small piece ad i used the whole thing.  I think it will make a nice springlike quilt for charity. 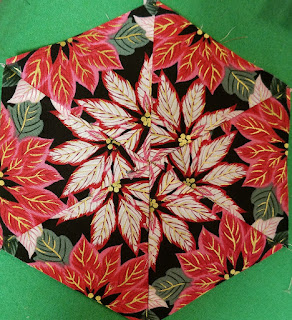 This is the beginning of another made from a really boring Christmas fabric.  I am afraid all the blocks are going to be pretty much alike!
This new Blogger interface is terrible so my posts look a little wierd.  I think they decided that everyone would use their phones and designed it for that.  All my pictures are on my computer.  I sent a comment in but am sure they are just ignoring it.  Very frustrating -- if i hadn't been using it for 12 years, I would seriously consider switching to another platform. 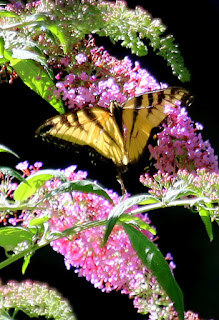 Wouldn't be complete without some nature  pictures.  This is an Eastern Tiger Swallowtail. 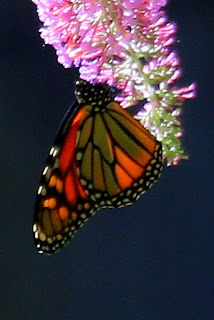 This is of course the Monarch.  They were both visiting my neighbor's Butterfly Bush.
Posted by Elizabeth at 7:49 PM No comments: 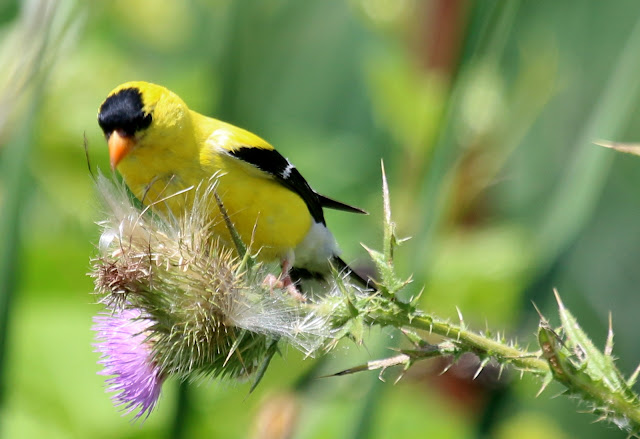 Having been housebound for two many months, I asked my daughter to take me to the Montezuma National Wildlife Refuge so I could see some of my birds.  It was a gorgeous day although there were not a great many birds.  We did see several of these beautiful goldfinches feasting on the Scottish Thistle. 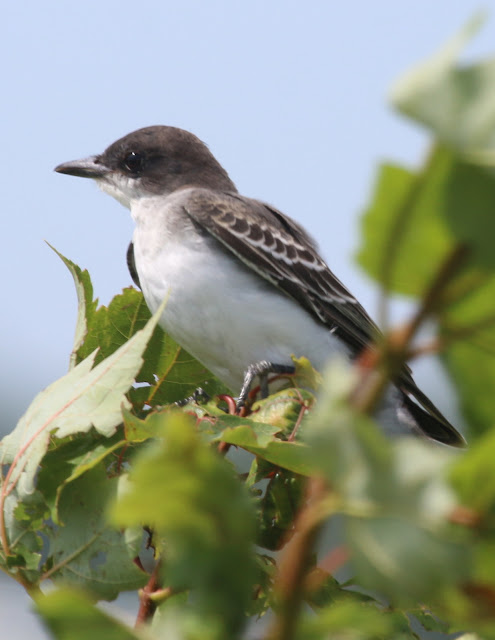 This is an Eastern Kingbird and I don't think I have seen one of those before so that was a nice find and he posed for us as well! 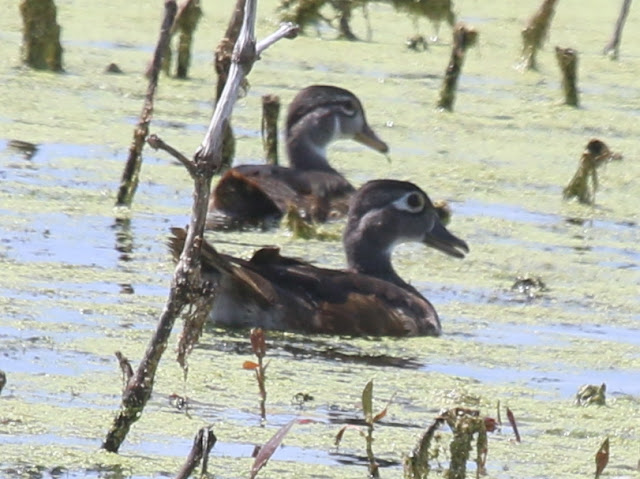 This is a female Wood Duck (forward) and a juvenile Wood Duck in the back.  I have seen male adult Wood Ducks before but this was a first for a juvenile and a female!  There were lots! 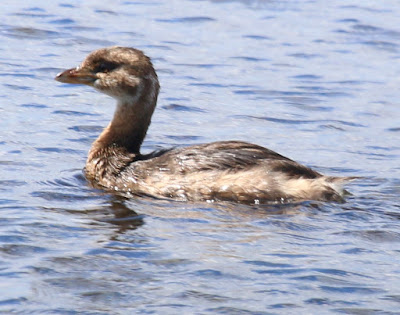 This was a juvenile Pied Billed Grebe.  There were quite a few of these as well as lots of juvenile mallards.  So it was a baby day for sure.  We also saw our fair share of Great Blue Herons, Crows and Vultures.  Daughter was disappointed that we didn't spot any Bald Eagles though. 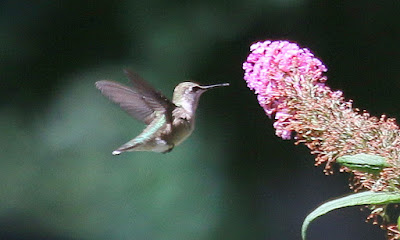 This and the following pictures were taken in my driveway of one of a pair of Hummingbirds that were constantly on the Butterfly Bush.  I called them the hummingbirds that think they are butterflies.  I had to use impossible settings on my camera and many many pictures to even get 3 or 4 decent ones as their wings go soooo fast. 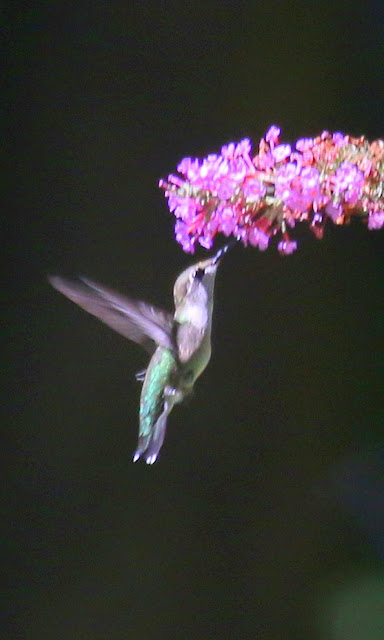 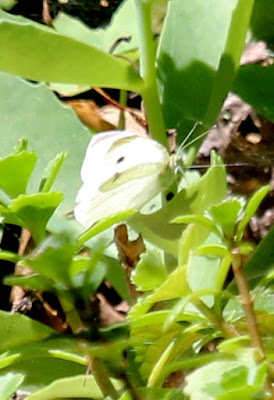 This is a Cabbage White butterfly.  We have a lot of these this time of year. 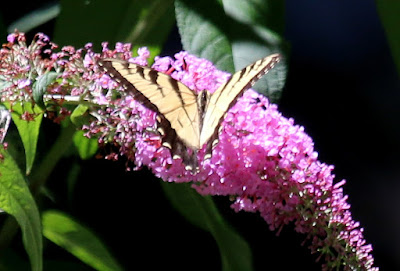 This is an Eastern Tiger Swallowtail.  In previous years, I have seen more of this Swallowtail than any other but this is the first I have seen one this year.  Still haven't seen a Spicebush Swallowtail, the other one that is frequently here. 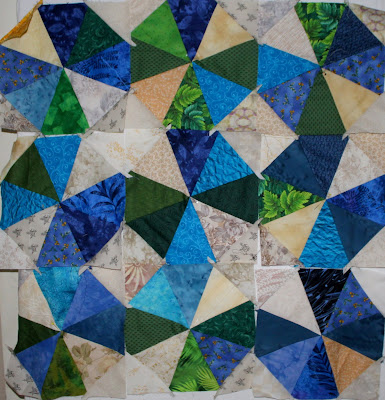 I have still been sewing away sitting in bed and I think finished enough of these for at least one baby quilt. 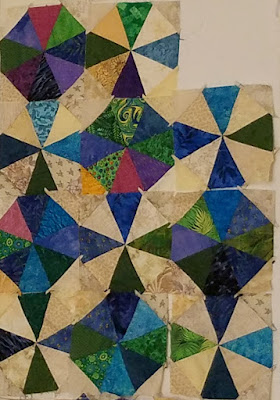 This is another version of the kaleidoscope block.  Again I have enough to make a baby quilt.
Posted by Elizabeth at 8:04 PM No comments: