A Couple of Days of Extreme Overdyeing! 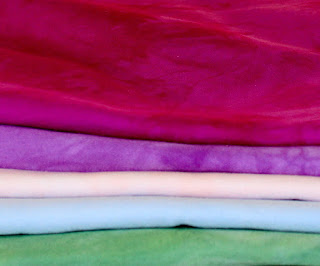 Well, this weekend was a marathon extreme overdyeing session with my friend Dianne.  We haven't done one of these massive dyeing sessions in quite some time. So we dyed 70 yards of fabrics over two days and resulting in 35 different colors.  I let her pick the palette this time and she picked mostly brights from my dye book.  We substituted a couple of colors so we would get something a little different.  I used some sateen I have had for probably 40 years -- not pfd but they used to give me pretty good results.  Dianne had Kona and hers were definitely darker in some colors.  This grouping is the colors we did the first day, They were (ProChem names) Boysenberry, Grape, very very dilute Strong Orange, Basic Blue and Leaf Green (which I don't think they make any more).  The Basic Blue was very light so I suspect is was getting over the hill. 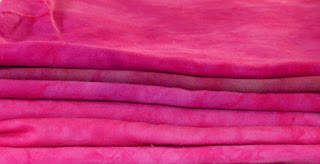 The second day we overdyed each of the above colors with Fuchsia, Lemon Yellow, Golden Yellow, Turquoise and their new Navy (which I really like).

This bunch is the above colors overdyed with fuchsia.  The differences are very subtle but they are there! 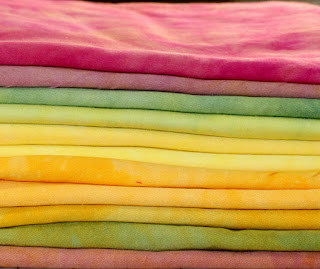 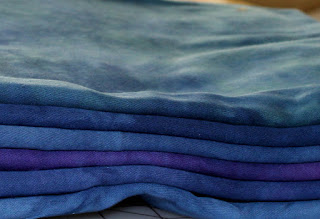 This is the very first bunch overdyed with ProChem's new Navy (I think 420).  Again, the differences are subtle as it is pretty overpowering and there were some very light colors dyed the first day.

This is those first colors overdyed with Turquoise.  I think they are a little darker than it looks in the picture. 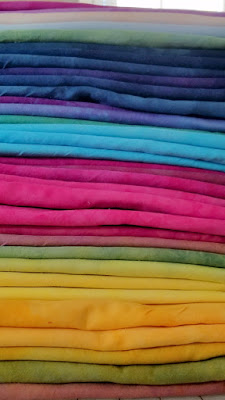 This is the whole pile of 35 different colors.  I was relatively pleased with the results even though some colors were a little closer than I normally get.  I can easily see a quilt made with those paler colors and some white! 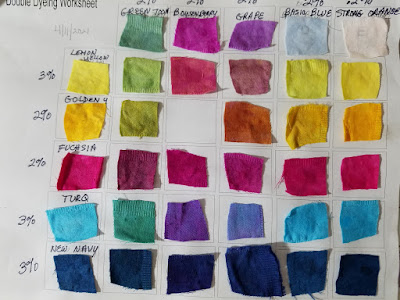 This is the chart that shows the dyes and results.  The one that is missing is still at Dianne's but I assume it will be a kind of deepish orange when I add it!

Posted by Elizabeth at 7:58 PM

I recently invested in some nice linen bedding, one of my first "adult" purchases after making it halfway through my 20s... it's a nice medium-deep kind of forest green color, but I'd like to make it more saturated. I'm looking at the Procion MX dyes, since they can be used with room temperature water and I know that's better for linen. But I've never done this before. Are there any specific products or processes you'd recommend for this? It's all one batch of a matching fitted sheet, duvet, and pillowcases.