Farmer's Wife Blocks, Some Charity stuff and Blocks for Our Guild Raffle Quilt! 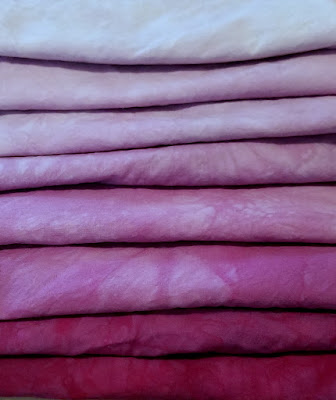 I should have added some hand dyeing to the iist of things done the last couple of weeks!  This was the most successful of my last dyeing adventure.  The picture doesn't adequately show what a nice purple gradation it is made with Jacquard Deep Purple.  I also did some ice dyeing with random fabric which turned out very pale and uninteresting so may  just throw it into a dye pot and overdye.  My one experiment was quite successful though.  It was copying something I saw on the Ice Dyers list on Facebook.  Many of the dyers just put down dry fabric, then sprinkle soda ash and dyes on top and then put ice over everything..  I was sure I would get spots of concentrated dyes doing this but didn't.  I used a lilttle Intense Blue and Basic Blue from ProChem as the dyes and got some nice mottling which will be great for skies. 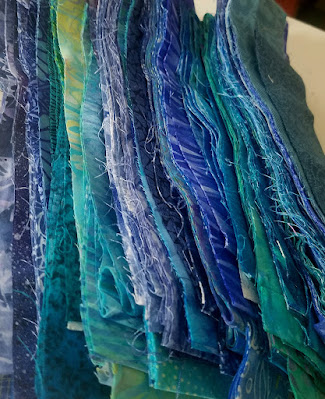 This is just a small sample of the 2 1/2 in blue strips I have filling 4  two and one half gallon plastic bags.  They will be used in making background squares for the Guild's newest raffle quilt. 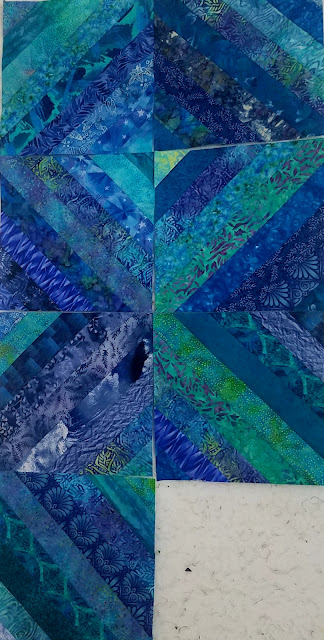 I made seven blocks so far and ran out of the fabric I was given to include in each block. 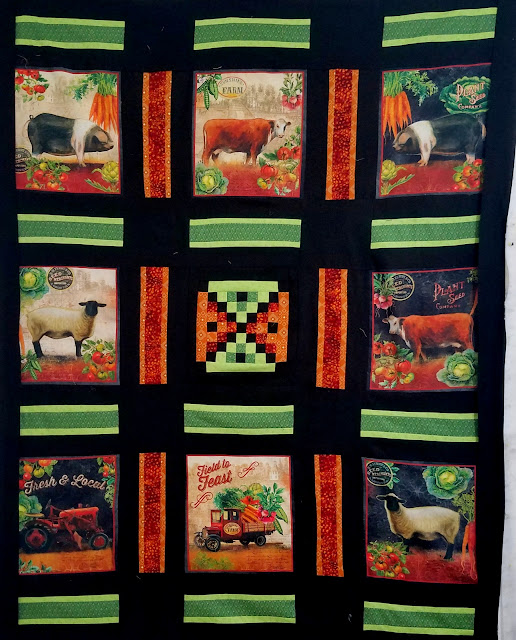 This was extra challenging.  I was given a panel with 8 scenes on it and needed to make a 50 x 60 in quilt or close to it.  I was also given a small amount of the gold and reddish fabric and the black.  I ran out of the gold so went into my stash when I got home and added the greens.  I also ran out of the black but knew it was the same block of which I had a bolt.  I also had to come up with a center block.  Of course the panel squares were not square so had to take that into consideration when figuring out the center block. 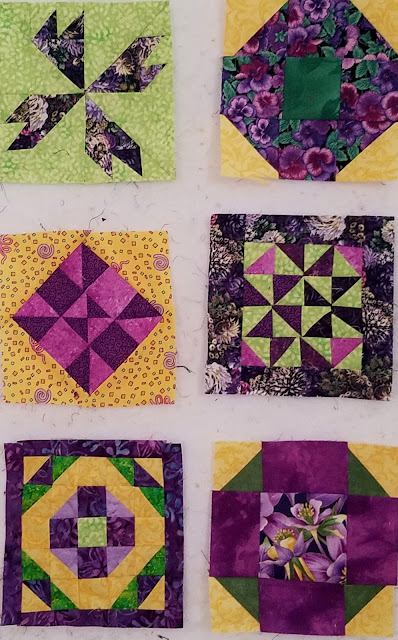 Our Guild had an open sew day at a local facility and I took several of the Farmer's Wife blocks to construct there.  This is the result of that day.  I had one other block but I had the measurements wrong so had to bring it back home.  Even home, I messed it up twice before coming up with a ho-hum block!

I did these three blocks yesterday.  The first one I did using the fast "Flying Geese" method rather than making half square triangles so it was super fast!  As you make four at a time with this method, I had 2 left over which I used today in a block!! 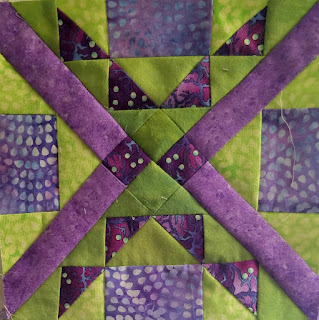 This is one of the two blocks I did today.  These were a little trickier than some and took a little more time.    This is the one that used the left over flying geese from the first of the three blocks above so you can see the truer color there! 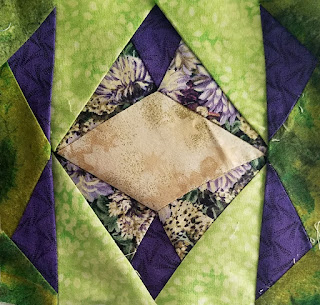 This was the second block done today and definitely more challenging.  I had to use templates for all the pieces.
Posted by Elizabeth at 4:38 PM