Well, they aren't ironed yet, but I did get my last double dye out of the dryer this morning. An interesting bunch of fabrics to say the least! My goal was to see all the different browns I could get and hopefully some greens like the last bunch I did and sold most of (so I didn't have any to play with!!). Of course, can never leave anything alone so tweaked the mixtures a bit and added some new ones so ended up with six colors overdyed with six colors. My choices were basically almost the same for the first bath, Sun Yellow, Tangerine, Golden Yellow in two different concentrations and then Strong Orange at 1% and Fuchsia at 1%. The second set of color were Pro Chem's Basic Brown, Pro Chem's Blue/Violet, my violet made with Intense Blue and Mixing Red, my brown made with Intense Blue, Golden Yellow and Mixing Red , my brown made with Navy, Strongest Red and Tangerine and my brown made with Fuchsia, Turquoise and Sun Yellow. The last one was the absolute biggest flop as I thought it might be. I really got a wide variety of browns and some other very foresty looking colors. There are several pieces that I think I am going to overdye. I am going to do another overdye using some of the same colors but in a much lower concentration to try to get some lighter colors as well. That will be my next experiment. But I have 36 new yards of fabric. I have about seven yards downstairs that I am also going to overdye from another experiment some time ago. There are about 6 in this last bunch that I am not crazy about so may try to improve some. None of these are in the group below. I have overdyed them with gold in one case and intense blue for the rest and am not sure of the results yet as they are still in the washer! 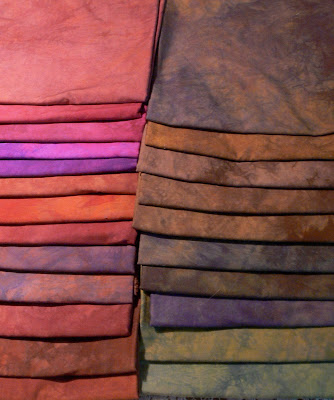 I did very littly mushing of this fabric as I wanted to get a lot of patterning and I did -- in some cases I could have done with a little less!!

One thing I have learned is that I really like working with the warmer yellows when doing these overdyes. I think the browns are nicer and the greens are much better as well. I will save my sun yellow for times when I really want yellow and use the golden or tangerine the rest of the time.

Below is probably one of my favorites from the bunch. It is gold overdyed with my own blue/violet. 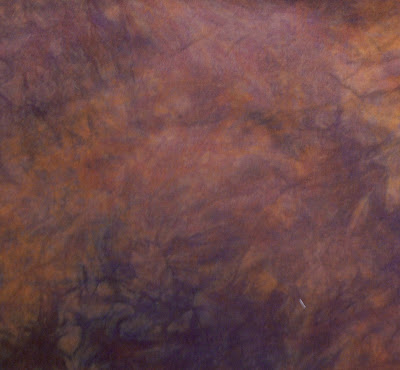 Posted by Beth Brandkamp at 7:48 PM