Every Day There is Something New!

As I have no wifi, blog updates have been sparse!! Well, today it is actually raining so I have no excuse not to come over to the library and catch up on email and do a blog update!! It is a little complicated now as of course thanks to Microsoft I can only use my computer online for an hour at a time. I have had to load all my pictures onto Warren's computer so halfway through being at the library, we switch computers so I can put some of my pictures on the blog!!

There doesn't seem to be a day down here where I haven't seen something I have never seen before! Today I saw giant Magnificent Frigate birds flying overhead just before the rain hit. They were huge and I didn't recognize them so had to consult my bird books. Unfortunately, camera was not in hand before they passed over. I was too entranced with them to go inside and get the camera. 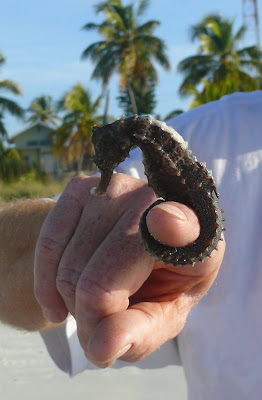 Yesterday, a couple pointed out a live seahorse on the beach. A local fellow came by and managed to get it way out in the water where hopefully it swam away. The couple had put him back once but he hadn't stayed. The little seahorse proceeded to curl itself around this fellow's finger -- it was pretty cool. I have seen one dead one before. (Warren had found it last year and was told by the naturalist that it was a real fairly rare find.)

On Sunday on their first day down here, we went to breakfast with my sister who has recently purchased a condo down here. Her wonderful husband cooked a stupendous breakfast for us and then we headed out to Six Mile Cypress Slough for a walk along the boardwalk. We got to see lots of birds, turtles and a very large alligator!

The weather has been wonderful although the water is cooler than other years (only 70 degrees instead of the almost 80 it was last year). It still feels nice to this northerner and cools you off on the warmer days (we had two days in the 80s this week which is unusual as well). 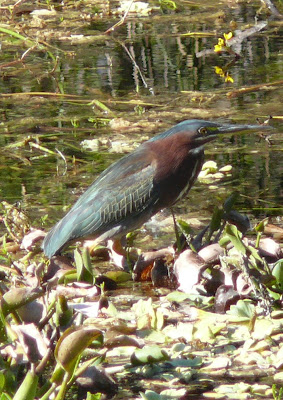 This is a little green heron which my sister spotted at Six Mile. There was a naturalist there and I don't think she even saw it until Gail spotted it and I identified it. 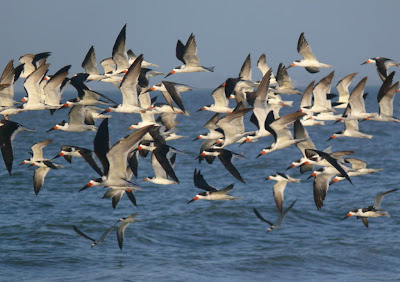 These are a large flock of my favorite shoreboard -- the Black Skimmer. The flock probably has a couple of hundred birds in it and they sit tightly on the beach and then fly all at once. If you double click, you will see the bright red on their beaks. 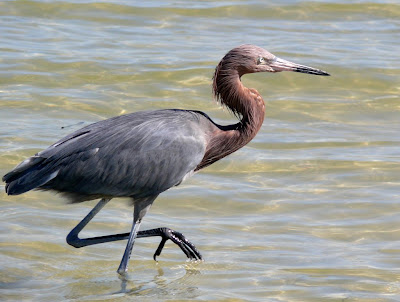 This was a reddish egret that my sister and I spotted at Bowditch Park. It looks like the little Blue Heron except it is quite a bit larger. 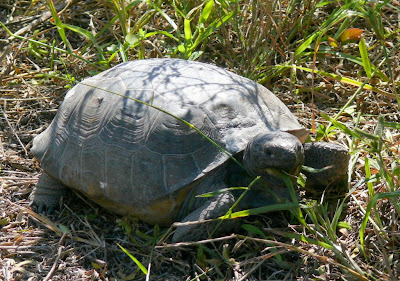 This is a gopher tortoise which makes its home in burrows at Bowditch Park. They are about 12 inches across and this one was eating up a storm! 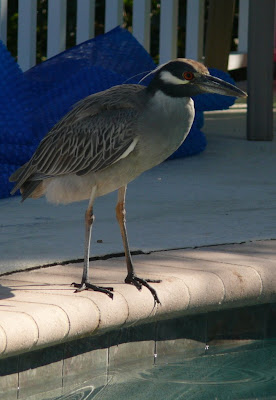 This is a Gold Crowned Night Heron taking a drink at the pool. This was the first time I had seen this type of bird in the canal and certainly at the pool! 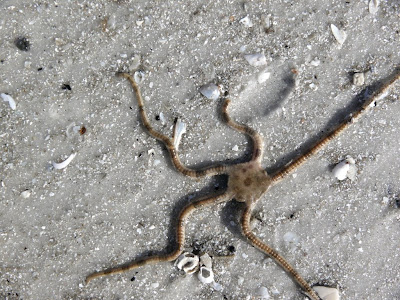 This was a very odd starfish still alive -- a variety I hadn't seen before! It is called a brittle starfish and really isn't very big (especially compared to the 9-legged starfish I saw last year). 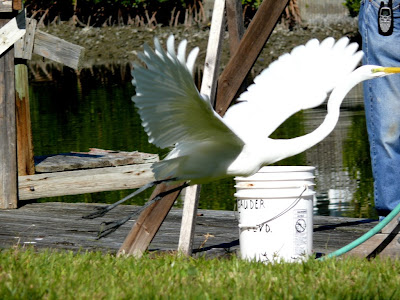 In keeping with my "birds in motion" this bird looks very much like the egret taking off in Caren Betlinski's quilt! 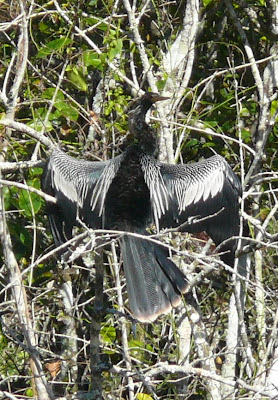 This is an Anhinga drying off its wings. They call it the piano bird! 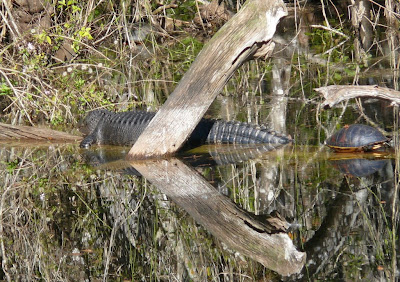 This was a very large alligator at Six Mile Cypress Slough along with a few turtles. We also saw quite a few turtles swimming around right under the boardwalk where we were standing.
Posted by Beth Brandkamp at 2:22 PM