Relaxing Days at the Beach 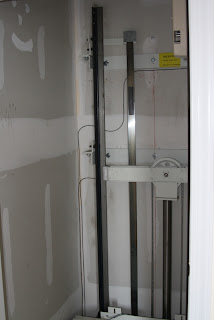 This summer brought more than its fair share of drama at the beach house.  We had the transformer right outside the house hit by lightening which took out our elevator as well as other electrical devices in the house.   Of course in a one week period later we had a tornado near by as well as an earthquake and then of course Irene.  It took quite a while for the new elevator parts to arrive and for Jamie the elevator guy to install them.  I took this picture of what the inside of the elevator looked like without the elevator!!  Besides replacing the circuit boards, he tuned things up so now it is quieter, added an extra safety measure and rests on the second floor when not in use (important for if and when we have a hurricane surge which waters down the first floor -- at least the electronics in the elevator will be saved)!  So everything is up and functioning and I am completely unpacked finally.  The weather has been just beautiful here so no quilting has happened yet!!  I am beginning to get itchy though.  I definitely miss my dear husband as well -- who would have thought! 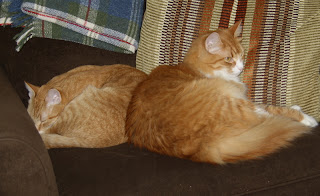 I have been in charge of Lisa's two kitties while she is in New Orleans of all places (she is very wet!).  They like sleeping together on the only piece of furniture which shows their fur -- I have since put a blanket down. 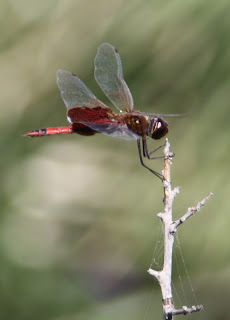 I haven't had much opportunity for picture taking but couldn't resist this dragonfly (or damselfly??) on my neighbor's bush.  He was not easy to get!! 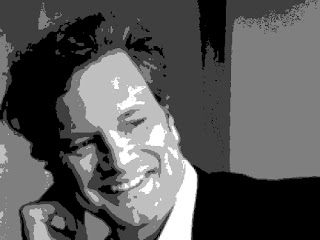 The most excitement recently for me is that Colin Firth is coming to Wilmington to make a movie next month.  This is a posterized version of him that I was using as the basis for my next quilt.  I would love to be able to use my own photo instead of this one.  My plan is to do an Andy Warhol kind of interpretation doing this portrait multiple times in all different colors and different types of fabrics and then add in different movie quotes.   This will not be one of the complex pieced quilts but will rely on fusing as it isn't intended as art, only as fun!! (Let the mocking begin...) If  you have seen my blog in the past, you will know that he jumped to the top of my list of favorite actors of all time after I saw The King's Speech last January.  I am hoping that somehow, some way I will be able to see him in person just to say thanks.  It must be good kharma that just as I was getting ready to do this quilt that he will appear nearby.  In preparation, I am going to do the  Screen Gems studio tour (locally they call Wilmington NC the Hollywood of the East).  Dawson's Creek and One Tree Hill as well as some Matlocks were filmed there.  I was surprised at the number of movies also filmed here --  independents.  So if anyone has any ideas about how I can meet him (or wants to join me on the hunt), please let me know!!  I can offer a Firth Film Festival  as I have many dvds of CF's movies down here with me (I  have a lot of non CF DVDs for entertainment as well)!!  I also have a couple of extra sewing machines and tables so  you could quilt as well!
Posted by Beth Brandkamp at 10:20 AM

Oh, boy! That is all SO tempting! I also think Colin is THE BEST!! Then good weather & a sewing machine? What more could anyone want? Enjoy every bit of your time down south.
Claire

Gee, Claire, I even have the elevator so you wouldn't stress that new knee!! Last time I checked plane fares were reasonable!!

Oh gosh, I'd give my right arm to meet Colin Firth!

That is kind of how I feel Vicki!!