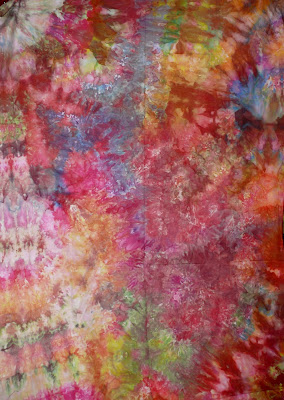 Well, the first batch of two yards is done and some more is "cooking" down in the basement. I noted that others did fat quarters at a time but I have found bigger yardage is more to my liking and I can always overdye! This is pretty much the whole piece (some is cut off from the bottom but that is my least favorite part anyway). I would definitely classify this type of dyeing as "snow resist" dyeing as the snow really acts as a resist and allows the colors to hit at different times. This patterning is a LOT different than I get when I just apply colors to scrunched fabric randomly!! Double click so you can see better. I have included several closeups below as well.

To reiterate what I did: I presoaked a two yard piece of mercerized cotton in soda ash and scrunched it up on top of an inverted box set inside another box. I then put about a five inch layer of snow (pretty crusty snow by the way not the light fluffy stuff which would make a big difference I think). I took several colors of dyes at between 2% and 10% concentrations and squirted a total of ten grams worth of dye (so overall I figured it would be about a 5% concentration). I inverted the box as I wanted the snow to melt and the water to NOT gather and pool on the bottom of the fabric. Sitting it on a screen would do the same thing (probably even better) but I didn't have any screen! I let the snow melt most of the way but got impatient near the end and the snow that was left was looking pretty white by now as all the dye had sunk down into the fabric. I literally took the fabric as it was, dumped it into a plastic bowl, put some plastic over it and nuked it for about six minutes (checking it every two minutes). I then washed it out and had very little washout which shocked the heck out of me! I was also amazed at how little transfer of dye there was to my hands when the dyes were very cold. The colors I used were MX Golden yellow, sun yellow, intense blue and mixing red. I did mix up a little batch of the yellows with the blue to get some green. The rest is serendipity! 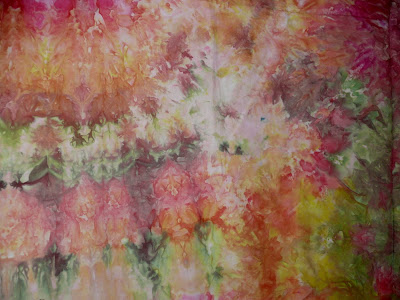 This is toward the side of the fabric where there was less snow and less dye. The scrunching patterning is clearer here. This was dye that just slid from the middle outwards. 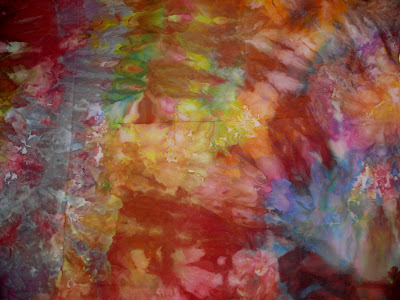 This is a closeup of another side where you can see the scrunching pattern more clearly whereas you can't see it in the middle at all. 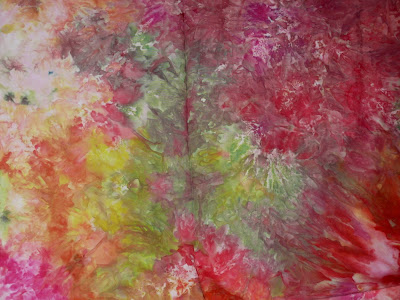 This is the middle of the fabric and if you double click, you can really see the effects of the snow resist and what it does to the fabric. 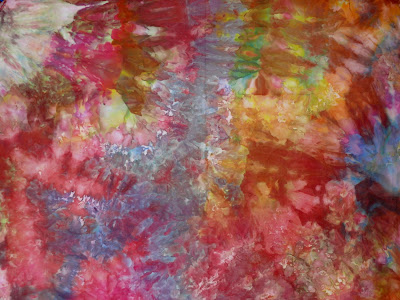 This is about a quarter yard chunk near the top.
Posted by Beth Brandkamp at 4:09 PM

These turned out great!

They are great. They have a watercolor effect.

Interesting patterns, Beth. It almost makes me want to try it myself.

These are just lovely! I won't be doing any of this dyeing here in Southern CA!!

Hi Beth, Your fabric is beautiful! I've read about this before on the Dyer's List, but seeing your pics has inspired me to try it. I've been planning to do some dyeing when we have our Winter break in another week, and I think that I'll give this a try. I want to see if I can create some nice "sky with clouds" fabric. It should be fun. By the way, I feel like we're almost neighbors. I live in Endicott, NY, close to Binghamton. Happy Dyeing and Quilting! Jay

Thank you for posting such beautiful pics and clear methods - I have posted some of your pics ( well attributed), but if you are not happy please let me know and I will remove them - I just think they are inspirational!