A Day of Dyeing!! 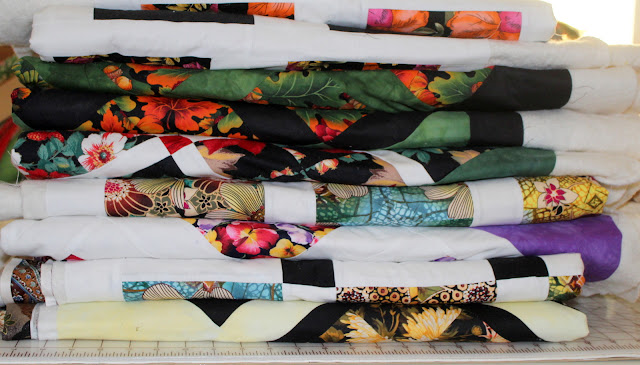 I have been busily spray basting quilts and doing some  initial machine quilting -- whew!  My Juki 2010Q is a dream to work with.  Even without a walking foot, it does better than my faithful Bernina 170 with nice even quilting.  Right now I am just stabilizing the tops with straight line stitching but look forward to the free motion which I enjoy more.

I spent the day yesterday dyeing with a friend.  I wanted to experiment with mixing Golden Yellow with Sun Yellow to see if I could get something approximating Tangerine (all ProChem names).  I used too high a concentration though so may overdye those darkest pieces.  I use a lot of  yellow in my quilting.   The amazing part to me with the yellows is that they looked a lot more splotchy before I washed them.  They are pretty even in color which is what I expect from yellow.  I did a gradation of a new navy blue that I got from ProChem which I thought was a pure color but isn't noted as such on their website.  I must say that there are no hints of anything but the blue in all the concentrations so maybe.  I like it better than the Deep Navy which is a pure color.  To my eye, this looks like it tends more to the red than the other navy but will have to check my book where I keep my records.  The darkest is an 8% concentration.  The purples are two different mixed dyes from ProChem.  The one I really liked and thankfully have the most of is Eggplant.  It doesn't give as much of a solid as some colors and acts a bit like fuchsia does but you can't spot the colors that make it up.  The Deep Purple on the other hand does break down into its components of red and blue.  I will definitely be ordering some of the Eggplant as I really like it!

Altogether I did 28 yards of fabric yesterday which is nowhere near a record for one day of dyeing!!  (I think 70 is my record but I was younger and did have my ankle problems then.) 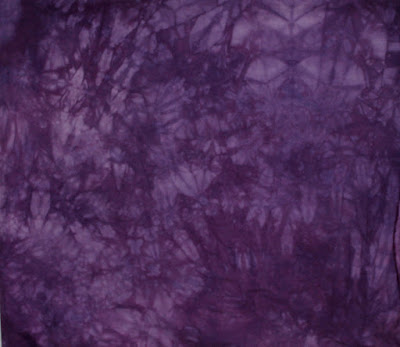 Here is a close-up of the Eggplant at about an 8% concentration.  Just the purple I wanted!!  I suspect it is a combination of Grape (a pure color) and one of the blacks.

Posted by Elizabeth at 2:56 PM