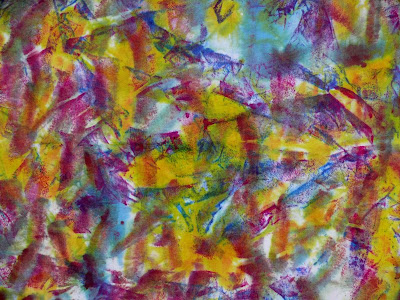 This is an example of direct painting with Procion MX fiber reactive dyes. Some might call this a monoprint as it is one of a kind and uses some printing techniques. This was done by scrunching the fabric and pulling a roller brush through thickened paints and then applying to the scrunched fabric; then, when it was dried, applying thinned dyes in the empty spaces.

Zann is home for a week which is a refreshing change of pace around here so let's just hope the weather cooperates! With some luck, I might be able to engage her in some dyeing which I need to get back to. The biggest problem has been weather which has not been totally cooperative as we haven't had many warm days the past couple of weeks. Procion dyes really don't batch well below 70 degrees. As monoprinting and some of my salt dyeing are really "direct" dyeing applications, the batching time at 90 degrees is probably a minimum of four hours. Probably a lot longer at 70 degrees.

Direct dyeing is the applying of dye directly to either untreated or pre-treated fabrics. The "prepared for dyeing (pfd)" fabrics are pretreated by soaking them in a soda ash solution and then either drying them completely, leaving them damp or leaving them wet. You then apply either unthickened or thickened (with print paste) dyes directly to the fabric.

If you choose not to pre-treat the fabrics, then you still have a couple of options: (1) using a fixing agent after the fact to fix the dyes (this works best on smaller pieces but is very effective). You would do this by painting the fixing agent directly onto your dyed surface after it has dried. You let it sit for about an hour (don't let it dry) and then wash it all out. The fixing agent that I bought was from Dharma and was called Afterfix but I am sure ProChem makes the same thing. (2) Including a 4:1 mixture of baking soda/soda ash into your dyes themselves. You would only do this for small amounts of dye at a time as this mixture will cause the dyes to exhaust in a fairly short period of time. I make large quantities of the dyes but only make 1/4 cup quantities of the dyes with this baking soda (sodium bicarbonate)/soda ash (sodium carbonate).

The second approach is the one I use most frequently as it is considerably less labor intensive than painting the goopy Afterfix all over a large piece of fabric. However, many of us have forgotten and used non-soda ashed fabric and done some intricate painting and didn't want to lose it. Using the Afterfix is the ideal alternative here. Doug Wilson on Dyerslist also has a method where he "afterfixes" with a hot soda ash/very high salt bath. I have never tried this method but sounds theoretically like it would work. A friend of mine has also painted soda ash solution on after she painted the fabric and found that to work as well (my guess is you would have to have some pretty intense colors so that they wouldn't become very pale with the extra liquid).

If you have presoaked your fabric, you are ready to try some direct painting or monoprinting. Monoprinting (one print) as I will use it here, is a technique of creating an image on some other surface and then transferring it to your fabric. Most times you can only get one copy of the image although sometimes you can get a paler second or third copy using the techniques here. I took a wonderful week long monoprinting class with Ann Johnson (http://www.annjohnson.net/). We tried a number of approaches to see what techniques we preferred. The techniques included using thickened and non thickened dyes, using smooth acrylic surfaces or a rougher foam surface. The possibilities are endless. (To be Continued) 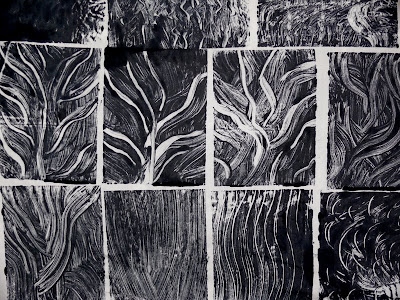 In the class I attended, we had three days to just explore our own images using any of the techniques we had used. As I am fairly familiar with how MX colors worked, I decided just to concentrate on making images with black and white. I made about two hundred different images just using the surfaces, the end of paint brushes and a broken foam brush and a bottle cap from the dye containers. 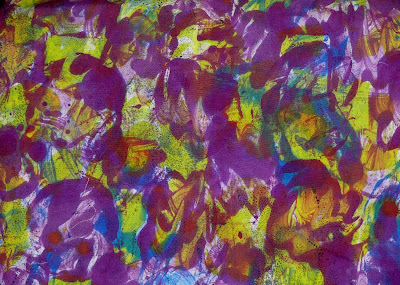 On this one I glopped some thickened dyes onto a good sized piece of acrylic (Plexiglas) and then smooshed (very scientific) the fabric down. I later overpainted with thinned dyes and probably did some other things in between!

With no camera in hand, I went to visit the opening of a friend's exhibit last night! So unfortunately there are no pictures from my blog, but are probably some from Marcia ( http://www.decampstudio.blogspot.com/) or from the artist herself - Jeanne Beck (http://www.exploringthesurface.com/). It was a very nice exhibit of Jeanne's work and it was good to see a lot of the RAFA members out there supporting her! You need to see her work in person to appreciate all the layers and detail in them.
Posted by Beth Brandkamp at 1:31 PM