A Day at an Artist's Studio 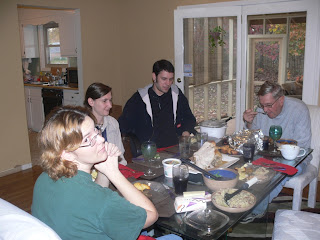 It's been awhile since I have updated anything but will have some pictures to post hopefully with this blog entry.

We had a wonderful family Thanksgiving with daughters LJ and Zanne and Zanne's husband Justin, Warren and I. The weather got a little chilly but it was perfect for a Thanksgiving day. The kittens were exhausted by this time as Justin played with them almost continuously for the former two days!! They just wanted to sleep by that day. 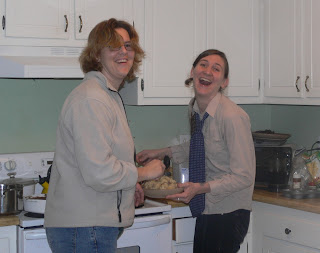 This is Zanne and LJ in the kitchen putting the finishing touches on the garlic mashed potatoes.

Warren and LJ spent the weekend putting up molding in LJ's living room and hallway and got pretty good at it by the end of Sunday. We all went out to eat after that day.

I have the good fortune of having a very old friend (Janice Mueller) lives here in Charlotte and we got together for the whole day today. She is a "later in life" artist who finished her BFA and MFA in her 40's and early 50's. She has been teaching design , painting and drawing classes at Winthrop College in Rock Hill SC for the past 10 years or so. Her early work was very representational but she is totally abstract now. She said she was probably most influenced by Mark Rothko . I really like her work and just love some of the pieces. I will have to ask her how much she wants for a couple of them as I would love to have them. She most often works in 5 x 5 foot planks of wood and layers tons of colors and then scrapes away and reapplies more color. We talked for a good two hours about her work and her process which I was most interested in. 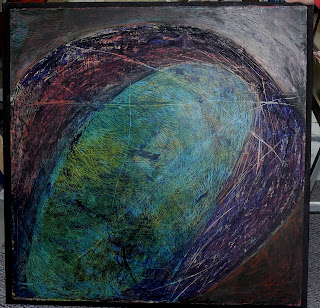 This was one of the canvases in her studio. 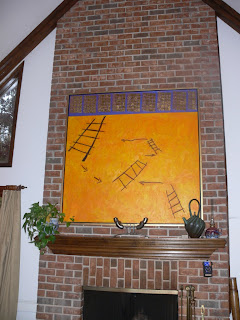 This was one of two large paintings in her family room. The room is huge and handles these large canvases wonderfully.,

These two canvases sit side by side in her formal living rooms where the cats were
making themselves quite at home. My photos do not do her paintings justice. She works primarily in oils so they are very luminescent and difficult to photo with any light in the room. I will download her cd at some point and post her better pictures. She is an incredible photographer as well

She says she works primarily with things for which there is no representation -- ideas and thoughts. She is very interested in mythology so that influences her as well. She starts with a blank canvas and a thought about some colors she wants to work with and then the canvas starts talking to her. I certainly understand that process as many times my quilts tell me what they want done and I have no control. Her color that creeps into almost everything she does is blue -- mine is yellow. I must say that an awful lot of her pieces were primarily warm colors though -- might be because she sells more of her blue pieces -- I don't know. She allowed me to go through her house and studio and take lots of pictures so I may put up a Picasa album and certainly will put some on the blog. Of course, I will forget the names for each of the pieces however!! She also gave me a cd of many of her works.
Posted by Beth Brandkamp at 8:17 PM